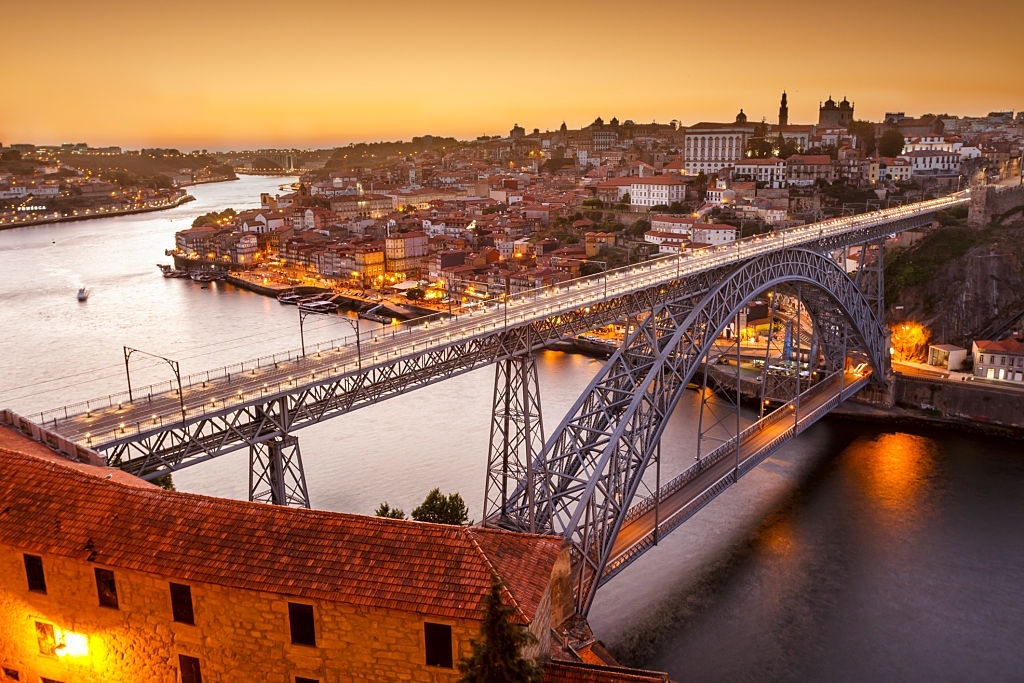 Spending a couple of days in the medieval Ribeira district, next to the Douro River is exciting. There is so much to see and do, you will have no problem filling your days.

As the second largest city in Portugal, it is surprising how small it feels as you wind your way up and down the cobble stone streets set in the hillside. It seems that there is a river view from every angle and there are a variety of ways to get around town.

The malecon (paved path)  goes for miles along the river, from the Dom Luis Bridge up to the town of Foz, where the river meets the ocean. We walked for many miles, and enjoyed stopping at sidewalk cafes for wine or snacks.  At the nearby town of Foz, there is a lighthouse on the point, as well as Fort de Sao Joao Baptista da Foz, which is fun to explore. It was built in 1570 and it’s easy to imagine the work they did to protect the river from invaders. There were strategically placed cannons in the fort all facing areas of the waterfront.

Many people chose to rent bicycles to tour the malecon. We didn’t, but probably should have! It looked like fun.

Another way to get around is to take the old tram. It has been running since 1895, and passes by every 20 minutes or so. We intended to take it, as it had a stop in front of our hotel, but we never did. One time we tried, but we were standing on the wrong side of the tracks so it didn’t pick us up! It’s an inexpensive way to get up and down the river.

We enjoyed a ride in the air tram (Gaia Cable Car) which took us from the waterfront all the way up to the bridge level, so we could see the entire area. It was a fun way to see the city from a different perspective.

Taxis are another option to get around town. We used them in the evenings and they can take a while due to traffic. But it’s the most convenient way, as most hotels will call one for you before you need to leave.

There is so much sight-seeing to do in Porto. There are churches, the Porto Cathedral, Dom Luis Bridge, Maria Pia Bridge, river tours, and best of all, the port cellars across the river. If we had more time we would have visited the cathedral and taken a river tour, and maybe even climbed the underside of the bridge!

At first we were intimidated by the amount of options and varieties of port cellars and tasting rooms. You could spend a week going to the different cellars, taking tours and learning about Port wine.

All of the port is produced in the Douro Valley. In 1717, the region was demarcated for the production of port. So, no one can name a wine port unless it comes from that region. It insures the quality of the wine.

It was delicious to sip port and eat chocolates while learning the different flavors and nuances of each wine.

Port tasting was a highlight of our stay in Porto.

There are so many dining options in Porto. We tried riverside cafes for lunches and wine, and splurged on two nice dinners to end our trip.

After six weeks of ham, salami, cheese and tortilla patata in Spain, we were ready from some serious Mexican food and spices. We chose Frida, a Latin restaurant with South American options. Tacos de barbacoa were delicious and so were the margaritas.

Restaurante 33  Alameda was the other restaurant we enjoyed a nice dinner at. It was in our hotel (Vincci Porto) and the food was delicious. The restaurant style was art deco and had an interesting history of being in the old fish market building. I was in dire need of protein after walking 500 miles on the Camino de Santiago, so I enjoyed the steak. Scott loved the vegetarian lasagna. The service was beyond exceptional. We also had breakfast in the restaurant two mornings in a row and it was one of the best buffets I have had.

Overall, my take on Porto was that it is a charming, bustling town. A town where you can sit on a bench and watch the river drift by, or for an adrenaline rush, you can climb the underside of a bridge! There seems to be something for everyone in Porto and I am glad we were able to experience it.