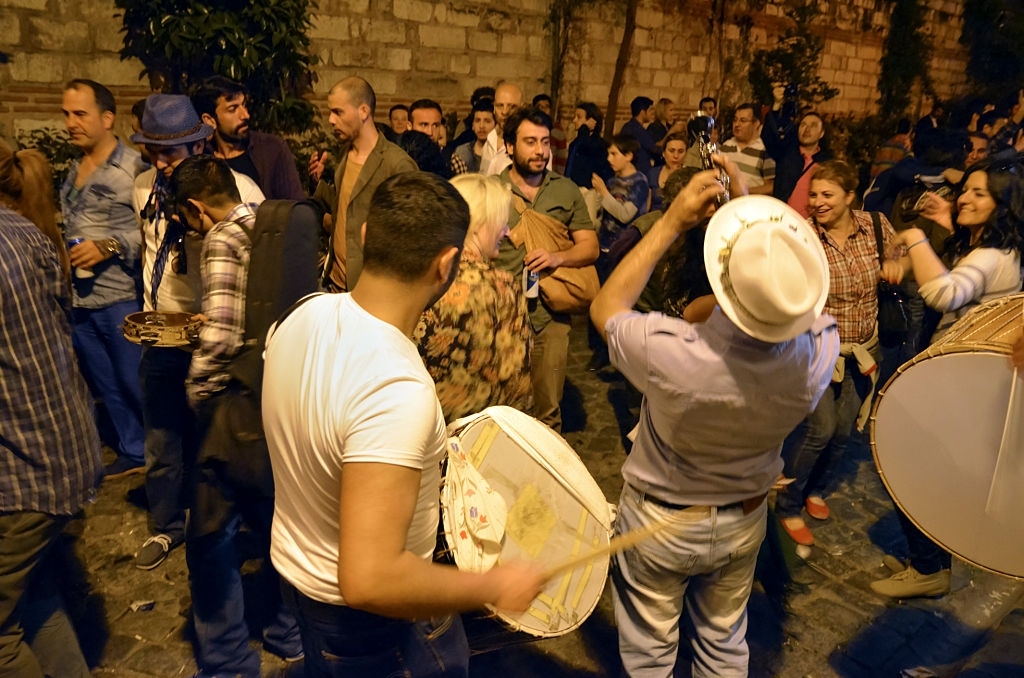 While planning our trip to Istanbul, Turkey, my friends and I knew we wanted to begin with the Ahrikapi Hidrellez Gypsy Festival.  Who wouldn’t want to listen to beautiful music and dance the night away?

Not knowing very much about Hidrellez, I did my research and will give you a brief history so you will understand the origin of this celebration.  Then, I will share our experience!

“Hidrellez” or Day of Hizir is the day which the prophets Hizir and Ilyas met with each other on earth.  Their names have become blended together over time to end up as ‘Hidrellez.” One belief suggests Hizir attained immortality and now wanders among the people from time to time, especially in spring!  Hizir is the symbol of spring and several of the beliefs attributed to him are:

May 5th is traditionally when the festival begins.  The starting and ending points may change over the years, but Ahirkapi Street is the place to be for music and dancing in this area of Istanbul.  I’ve read there may be stalls set up for food with vendors selling yummy local foods such as kebabs, meatballs, fish in bread, baklava and many others. This is available earlier in the evening, but our group had a late start and we missed the food vendors.

My group of ladies consisted of Sarah, Jenn, Blythe and Kathy.  Our young college friend Anna was a student on exchange in Istanbul and was able to join us as well.  We all met up for drinks near our hotel in the Sultan Ahmed District before we headed to the festival.  Before we knew it darkness had set in, so we made our way on a short ten minute walk through old town toward the Bosphorus and the area of Ahirkapi Street.

We could hear and feel the festival before we saw it.  The drums were pulsing through the crowd.  It was wall to wall people in the narrow winding streets, dancing and celebrating.  Right away our friend Kathy decided the loud music wasn’t for her and she said her good-byes.

The temperature was perfect, maybe in the 60’s (Fahrenheit), and not cold one bit.  We joined the crowd and made our way toward the closest group of roving musicians.  At that point it was too crowded to dance and we were feeling claustrophobic.  We kept walking. It was like being in a current that swept us along, holding each other’s hands so no one would be left behind.  We saw people selling beer at a couple of stands.  Not being a beer drinker, it was disappointing not to see any other alcohol for sale.  As we walked along we saw artists painting intricate henna designs on women’s hands.   There was also a man with a wooden cross raised high above his head, covered with flowered hair garlands, all for sale.

Along one wall was the area called the “Wishing Wall,” where people were writing their special wishes on a Post-it note and then placing it on the wall.  For just a couple of Lira we could have scribbled our wish, but we were still caught up in the human current and following the beat of the music.

Finally, we saw someone selling bottles of wine!  That was a great moment for us.  Imagine our surprise when we discovered there were no cups and we would be drinking straight from the bottle. We managed just fine, sharing germs and all, and powered that bottle of red Turkish wine right down!

We stopped and danced as small bands would happen upon us.  We danced and danced until they moved on, and sometimes we would follow them and do it all over again at the next location just down the street.  We also saw talented belly dancers mixed in with people that were just there to watch the festivities.

Everyone was surprisingly nice and polite the entire time.  We never saw any fights, pushing or people being belligerent.  It was such a peaceful experience even though we were in the center of heart thumping drums and horns.

Four bottles of wine later, we found a store and bought water.  We were sweating so much from all the dancing, we had to rehydrate!  We were slowing down and it was getting late.  We took a bunch of pictures, laughed a lot and decided to find a restaurant for dinner, even though it was after midnight.

What a fabulous time we had celebrating at the Gypsy Festival!

If I am lucky enough to go again I will stay longer and make my way with the other revelers to the beach or Ahirkapi Park for the bonfires at the end of the night.  People jump over fire, as well as dance and place wishes on the Nahil, “Wishing Tree.”

Have you been to one of these popular festivals in Turkey, or another Balkin Country? If so, how was your experience?  If you are interested in a guided tour of Turkey, please click here for more information on Aegean Journeys.