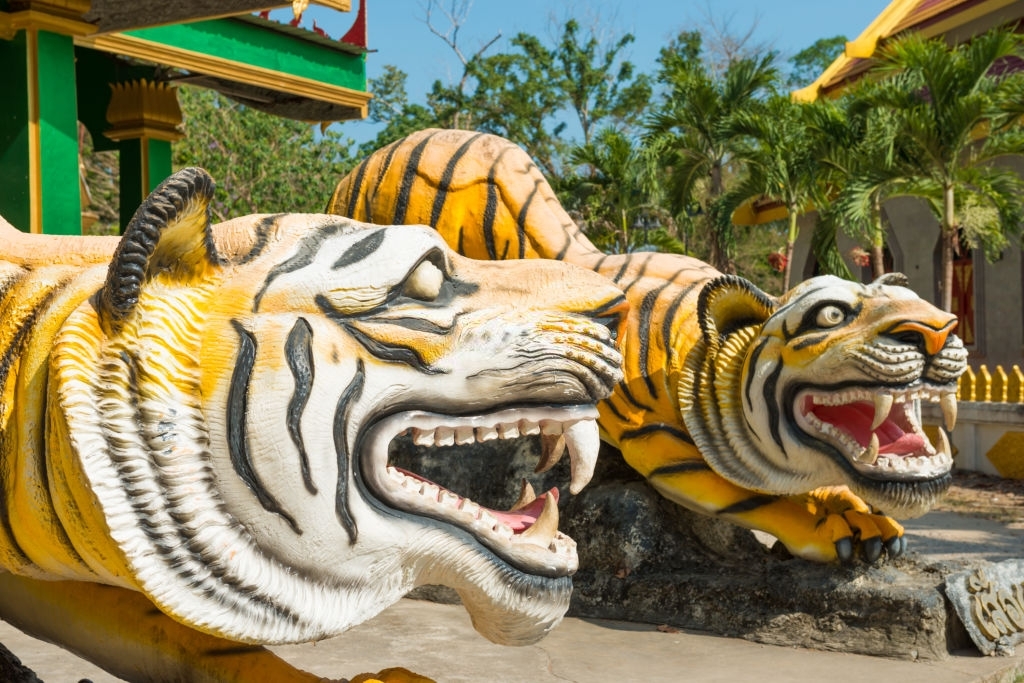 Our visit to the Tiger Cave Temple, Krabi Thailand. On our visit to Thailand, I was most looking forward to visiting the Tiger Cave Temple (Wat Tham Suea). It is known as a sacred Buddhist site, just outside of Krabi, Thailand. I had read that there were 1,237 steps to the top of the mountain. There were stories of monkeys who would hang out in the area as well.

We took a taxi from our hotel to the Tiger Cave Temple complex. On the way, I warned my husband and our friends, that maybe the monkeys wouldn’t be there that day. I didn’t want us to get our hopes up and then be disappointed if there weren’t any monkeys after all. We were all excited to see monkeys up close, as we had only seen them high up in trees, previously.
As we entered the grounds of the temple complex we were very impressed. It felt like a small village. The main street we walked up led to a large statue of Guan Im, the Taoist deity revered by Chinese-Thai Buddhists. There was traditional music playing and orange and yellow flags waving in the breeze.

Around the base of the staircase that led up the mountain, we saw plenty of monkeys running around. We were so excited we stopped to watch the monkeys play and took a few pictures before beginning our ascent.

As we began making our way up the steep concrete steps, I started thinking about how many steps up 1,237 really was.

The monkeys followed us for a while, playing on the guide rails and climbing the cliffs. Scott got the full experience by being peed on by a monkey from above him in a tree!

After we arrived at the top, we paid our respects to the huge golden Buddha. Then, we wandered around the different levels of platforms. We couldn’t imagine the work that went into getting all of the materials and supplies to the top of the mountain, not to mention the time and skill involved in building it. It was beautiful and impressive. Also amazing, were the 360 degree views of the entire Krabi area.

It was interesting to think that we had landed at the airport in Krabi, and driven through town seeing the huge Buddha on the mountain and not realizing that it was where our 1,237 step journey would lead!
After appreciating the view, and taking a ton of pictures, we made our way back down the mountain. This proved to be much quicker, as I didn’t need to stop every five minutes to catch my breath!
The monkeys entertained us as we drew closer to the bottom. They were brazen in their interest in water bottles. We saw one monkey jump onto a man’s thigh, grab his water bottle, then proceed to poke holes in it with his sharp little teeth and then drink up the water. The funny thing was, there was a big waterfall near the bottom of the stairs that the monkeys could drink from when they were thirsty!

As we almost reached the bottom, a monkey actually jumped onto Scott’s back and started chewing on the trekking poles, which were sticking out of his day-pack. We had a good laugh at that! Those monkeys were so curious and entertaining!
Back at ground level, we sat and drank the juices and teas we purchased from vendors. It was the perfect spot to listen to the music, people watch, and monkey watch.
Next, we decided to take a separate set of stairs to see the cave area, where the monks lived. I was hesitant at first to go up anymore stairs, but it was only 184 steps and they led us into the Khiriwong Valley. The temple was founded in the 1970’s, by Abbot Luang Por Chamnean Srilasatheto. He was in the area to meditate in one of the many caves. The legend says a tiger entered the cave but did not harm him, and so a temple was created at the spot. There were even tiger paw prints in the cave that are famous, but we didn’t know about them until after our trip.

It was so interesting to see the system of caves set into the side of the mountain. This is where present day monks live. We could see their modest homes tucked into the mountain side.

This area was also the site of a meditation center, where monks and nuns came from all over Thailand to retreat and meditate. It was such a peaceful spot, set within the caves, that I could imagine it would be a great place of contemplation.
We were able to explore the large cave with a shrine set towards the back. And what a surprise to find a dog sound asleep in the cave as well! It was a nice cool spot on a hot day.
A narrow trail wound its way through the valley jungle. We had a short hike before heading back to the stairs and exiting the Tiger Cave Temple complex.
Our visit to the Tiger Cave Temple was another highlight on our adventure in Thailand. It offered a little bit of everything; spirituality, contemplation, exercise and monkey watching.
It’s a must see if you are visiting the Krabi area.