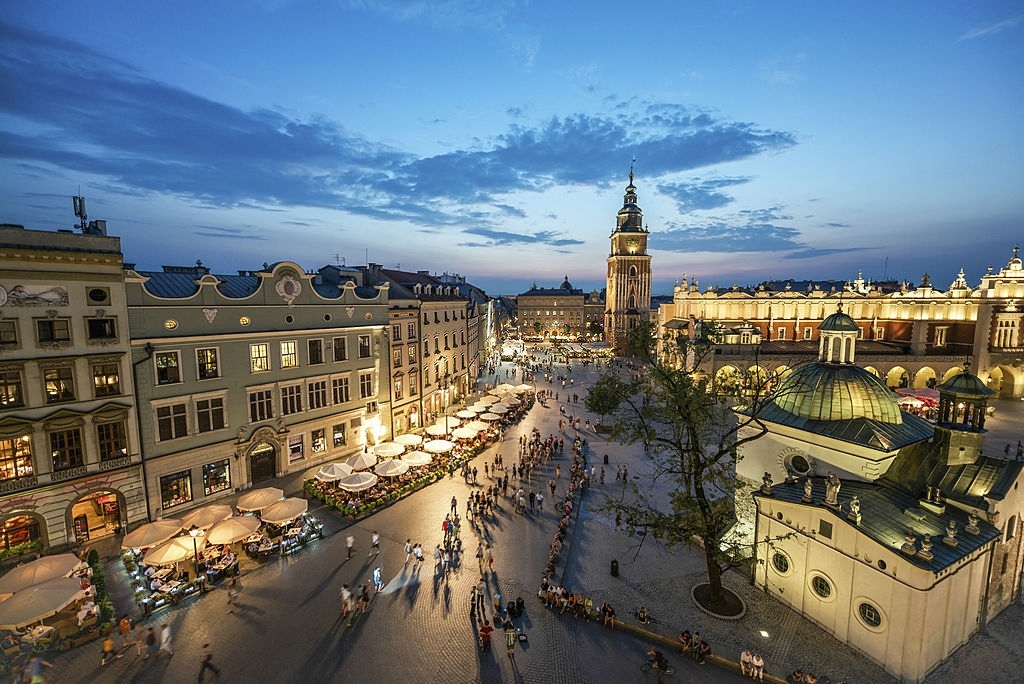 FIVE Great Things to do in Kraków POLAND

Whenever you hear anyone speak about Poland, invariably it’s about Warsaw in particular. Yes, Warsaw is the capital of Poland and also its largest city having once been known as the “Paris of the East” until it was all but destroyed during World War II.

Meanwhile, Krakow, the biggest city in Southern Poland escaped relatively unscathed and thusly much of what you see in Krakow today is in its original state, apart from some minor restoration work. Krakow is filled with much history given that it used to serve as the capital of the General Government when Poland was occupied by the Nazis. Moreover, it lies just a stone’s throw away from the horrific Auschwitz-Birkenau Concentration Camp.

In this article, I will be calling upon some of my recent experiences and listing 5 main attractions you ought to see when visiting this amazing city.

The Old Town is one of my favorite places in Krakow. You can spend two whole days just walking around the Old Town quarter, admiring the architecture. Taking “tea breaks” between strolls is advisable to soak in the amazing atmosphere and people watch. The entire medieval Old Town was one of the original places listed as a UNESCO World Heritage Site. This place is always filled with life, especially in and around the Main Market Square.

Fun Fact: Spanning 9.4 acres, the Main Square, or Rynek Główny as it’s called, is one of the largest medieval town squares in Europe.

A great recommendation is for you to set aside a day to make a trip down to the Auschwitz-Birkenau Museum to learn more about the Holocaust. It isn’t like grand & intricate renaissance architectures that we observe in many parts of Europe. It’s not like the skyscrapers that try to impress through their size and engineering wonders. It’s one of those places that leave us with much to ponder about, so much to self-reflect upon.

Pro Tip: I would highly recommend you book a private bus tour that brings you to and from the Camp as it can be quite a hassle to arrange your own transport there. Although public transportation can be cheaper, you might encounter unforeseen problems such as an unexploded WWII shell near the train station. I once had to bus around the bomb to a station farther off, destroying precious hours for sightseeing. The tour also includes your entrance ticket too!!

Fun Fact: Auschwitz and Birkenau are actually two separate sites connected by a 15-minute walk. Auschwitz has been preserved as an outdoor museum with many exhibits detailing the horrors which occurred at both camps. Birkenau was more or less left as it was when the Nazis abandoned it at the end of the war.

The Wawel Castle is one of the largest castles in Poland. It served as a residency for the Kings of Poland where the country’s rulers governed Poland for five centuries until the 1500s. It’s a symbol of the independent Polish state and is now the country’s premier art museum with a priceless collection of 16th-century tapestries. Although a ticket is required for you to view the exhibits, it’s absolutely free to just take a stroll within the castle walls and take pictures.

Boleslaw the Chaste ordered that the old city at the time, Stare Miasto, be re-laid out with orthogonal streets in 1257. He then decided to unify the different peoples around Wawel hill that had been there since Paleolithic times. The beginning of the castle dates back to the 11th century. The Wawel contains the Royal Treasury and the Gothic cathedral of St. Wenceslas as well. It was actually fortified in the 14th-century, destroyed during World War II, and then rebuilt by the locals.

4 | See the Jewish Quarter of Kazimierz

Just a 20-minute walk south of Krakow Old Town, Kazimierz Jewish Quarter is filled with loads of history. It was the center of Jewish life for over 500 years until it was destroyed during World War II. Kazimierz’s Jewish community deported to Auschwitz numbered 64,000 — only 6,000 returned. None exhibits a stronger sense of pre-war Jewish culture than Kazimierz. Today, it’s one of Krakow’s liveliest districts where historical sites, art galleries, and cafés abound.

Pro Tip: Since Old Town, Wawel Castle, and the Kazimierz are all located within walking distance of one another, I would highly recommend visiting all of these places in a single day if short on time. Start your day by taking a stroll in the Old Town before heading south to the Wawel Castle, then Kazimierz.

5 | Play at the Kraków Pinball Museum

Located betwixt Wawel Castle and Kazimierz, the Krakow Pinball Museum is a hidden gem. There are of course several pinball museums all over the world. Not too long ago, before the advent of video games, pinball machines were one of the most popular games. They could be found everywhere, be it arcades, hotel lobbies, or social halls.

I can remember playing “Joust” in the lobby of the Century City Sheraton, waiting for my parents to break from seemingly all-day meetings with Mary Dunn and the cast of the World Book traveling sales troupe. Guess poor Daphne had to endure endless prep for the hard sell. I DID get to ride the glass elevators up & down and follow a WSB-TV Channel 2 reporter around — that was nice 🙂

However, it’s now become a thing of the past. Nonetheless, it always feels good to relive some of your childhood memories by spending an hour or two in the Pinball Museum! Not only will you see some of the rarest pinball machines there, but you can also play other non-pinball games such as Pac-Man.

Where to STAY in Kraków POLAND

There are many options to choose from in terms of accommodation so fret not. I would highly recommend staying within or somewhere near the historic central district as most of the sightseeing mentioned is located in or around the Old Town anyway.

Loretanska Apartment 6 comes highly recommended. It’s situated just outside of the Old Town and only takes you barely 5 minutes to get to the old city district. Moreover, the apartment is cozy and newly furnished with a helpful reception. You could also arrange for day trips to Auschwitz or even the Salt Mines in nearby Wieliczka and Bochnia by speaking to the staff in the lobby!

These mines are excellent examples of olden salt mining techniques from the 13th-20th centuries. The chambers excavated underground for salt were then cleverly turned into workshops, storerooms, and even chapels. Travelers have been sightseeing decorations and statues carved into the rock salt since the early 19th century.

Where to EAT in Kraków POLAND

Not only is food cheap here (relative to places like the UK and France at least), but it’s also really good! There’s one place, in particular, you ought to try if heading to Krakow.

Luna Siciliana is an Italian restaurant that sells authentic Italian food for a really reasonable price. Try the spaghetti carbonara and you just might love it. At least you’ll love the price: only 24 PLN (around $6 USD today). You can never get such a good deal just anywhere in London, although bargains do abound.

You can always fill your belly with a delicious plate of very filling Pierogi (Polish dumplings). They come stuffed in all sorts of varieties like cabbage, minced meat, or even mushroom, and are either boiled or fried. Meat lover? Treat yourself to fried bacon bits, and sautéed onion. Dumplings stuffed with potatoes, onion, and quark cheese sound good if you’re going the vegetarian route. There’s even sweet blueberry pierogi!

There are a bunch of other amazing places and Polish food to experience I haven’t mentioned.