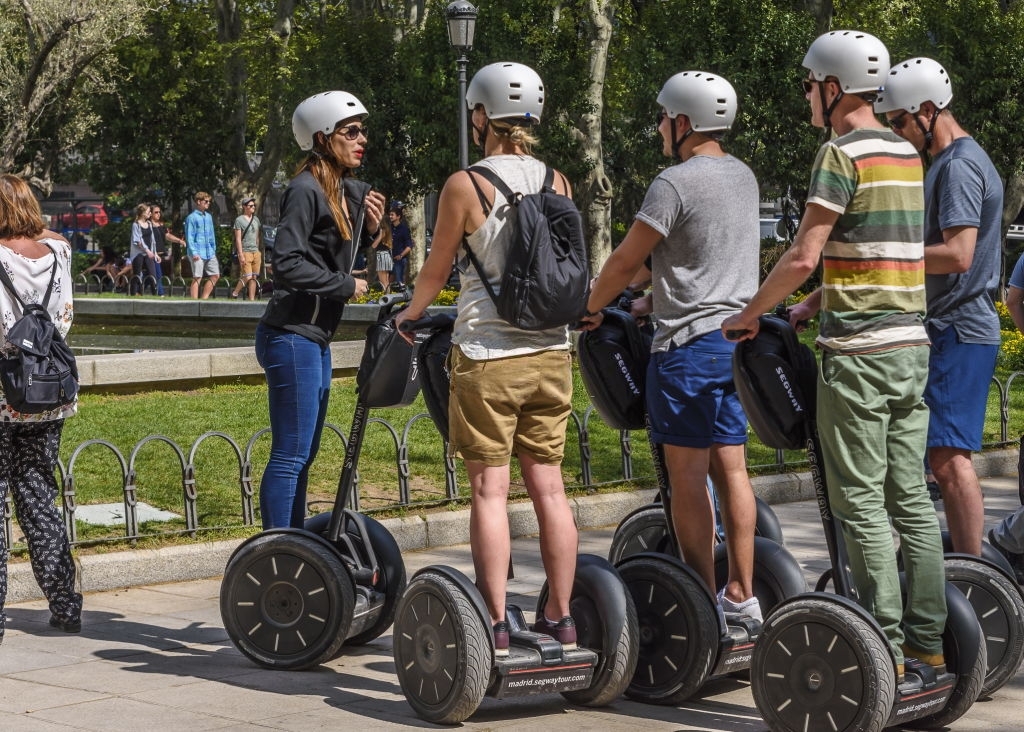 I wanted to write this article about a tour we took of Madrid by Segway because it’s the perfect activity if you are limited on time in Madrid.

We arrived in Madrid and only had one day and one night before flying home to California. We had walked the Camino de Santiago, spent four days in Porto, Portugal and didn’t leave ourselves enough time to explore Madrid.

After we checked into our hotel, we realized we were just steps aways from the Royal Theater and the Plaza de Isabel II. She was a well-regarded Queen and received the throne at age 13. She married Francisco de Asis and gave birth to 11 children. Isabel reigned until 1868, where she then went to France in exile.

After a short rest break at our hotel, I decided to investigate what else was nearby. I pulled up the TripAdvisor app on my phone, tapped the ‘Near Me Now’ button and then tapped ‘Things To Do’.

Segway Travel Madrid was at the top of the list. And, the best part, only 500 feet away!

We had never driven Segways before, but liked the idea of exploring Madrid without walking. We had just walked 500 miles and needed a break!

Scott and I walked down the street to the Segway office and checked in with them to see if we could take a tour later in the afternoon. We were in luck! The next tour would leave in one hour and we were the only people signed up.

It gave us time to have a quick lunch at a nearby tapas bar and still be back in time for our tour.

We were given very detailed instructions and a thorough lesson on the use and safety of our Segway. Our guide was very patient, as I started out very slowly.

At first, it took some skill to maneuver along the concrete paths.The first place we visited was the Royal Palace.  Palace is the official residence of the Spanish Royal Family, but they don’t actually live there. It is mainly used for State Events. The Palace has 3,481 rooms and for an entrance fee of 11 Euros, several rooms are open to the public. We didn’t go inside, but enjoyed the grand beauty of the Palace and found it very picturesque.
[pic Photo Credit: Segway Travel Madrid] Next, we drove ourselves down the sidewalks and along busy streets. Our guide led the way, as we followed. I was afraid, and slightly out of control on the downhills. Scott said I kept a smile on my face and didn’t look terrified of running into traffic at all.

Our next stop was way around the Palace property to the lower gardens. We were able to park the Segways to walk around and enjoy the gardens. The backdrop of the Palace was spectacular.

King Philip IV built fountains and planted vegetation. After the Palace was finished, there was limited money, and so the gardens were not improved until the mid 1800’s. Queen Isabel II improved upon the gardens and had the park designed in the Romanticist Style.

After crossing a busy street on the Segway, which made me very nervous at first, we entered the Buen Retiro Park. This park is one of the largest in Madrid. In the 1500’s a formal avenue of trees was laid out, and we were able to drive down this concrete boulevard between the trees on our Segways. The park has many sculptures and is one of Madrid’s most popular attractions.
[pic]

After leaving the park, we drove on sidewalks uphill for a bit. This was much better for me, as I was able to control my Segway better than downhill. We passed through the beautiful Parque de la Montaña. The park had many benches and plenty of people were out enjoying the nice weather.

Next, we stopped at the Temple of Debod.
[pic] Temple of Debod is in the same area and built in 200 B.C. It is an ancient Egyptian Temple. Due to dam construction in Egypt, the temple was at risk for destruction. There were many fears of losing the UNESCO heritage site, so Egypt decided to donate the temple to Spain, as a thank you for saving some of their temples.

It was a beautiful sight and such a special thing between two countries. The temple was rebuilt in 1972 in Madrid. It is one of only a few pieces of Egyptian architecture in the world that can be seen outside of Egypt. It is such a beautiful spot to visit, that any time of day, or night, is a breathtaking view.

At the end of our tour we headed back toward the office,  and skirted the Plaza de Oriente. We walked back to the plaza to spend more time there later in the day, as there was so much to see.

The landscaped gardens were beautiful. We enjoyed the 44 statues of Spanish Kings, which lined the square. The workmanship was very detailed and we couldn’t believe they had held up so well since Medieval times.

Taking a tour of Madrid by Segway was so much fun! We saw many sights and covered a lot of distance, which we otherwise wouldn’t have had time for.

Have you taken a Segway tour?

Would you do it again? I would, but it would need to be on flat terrain.

I'm just one of the many contributors to FollowthePIN who have crisscrossed the globe. Our international swagger and expertise will serve to encourage and challenge you in your wanderlust and personal journeys.

* Where is SLOVAKIA Located? [Slovakia Map]

* Where is COSTA RICA Located? [Costa Rica Map]
2 weeks ago

# How to Eat Sushi the Right Way?
3 weeks ago

* Where is GEORGIA Located? [Georgia Map]
3 weeks ago

* Where is KUWAIT Located? [Kuwait Map]
4 weeks ago

SEVEN Things to Tell Your Younger Self
1 month ago

* Where is MOLDOVA Located? [Moldova Map]
1 month ago