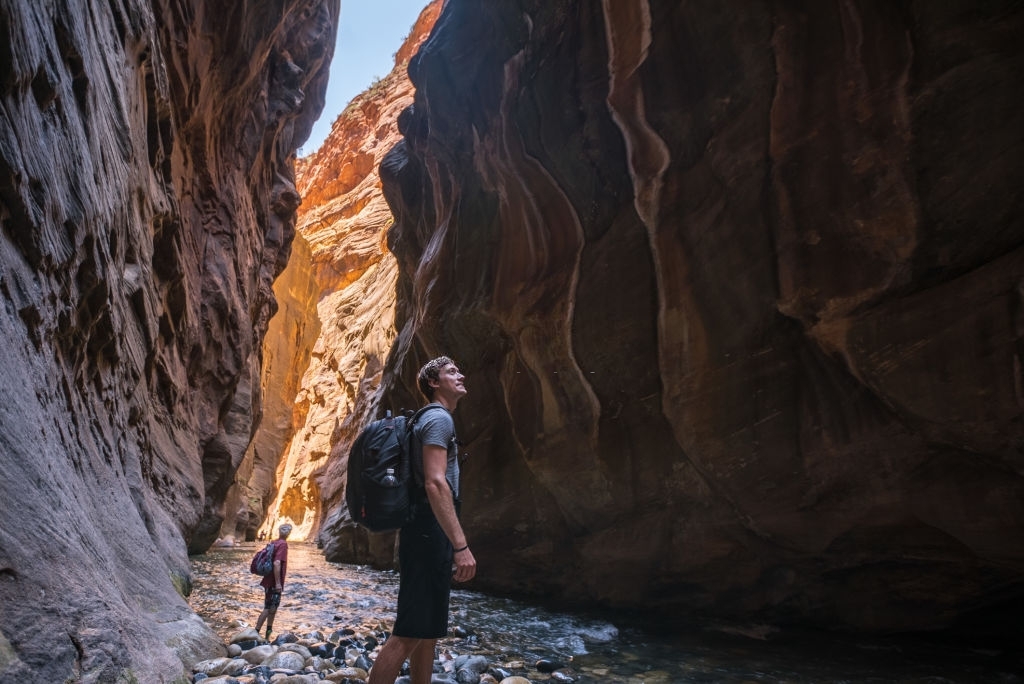 Hiking The Narrows Of Zion

After hiking Angel’s landing, my husband and I left the park and drove two minutes into the town of Springdale, Utah. We had reservations at a charming B&B called Under the Eaves. Its location was perfectly situated in the center of town so we could walk to everything. 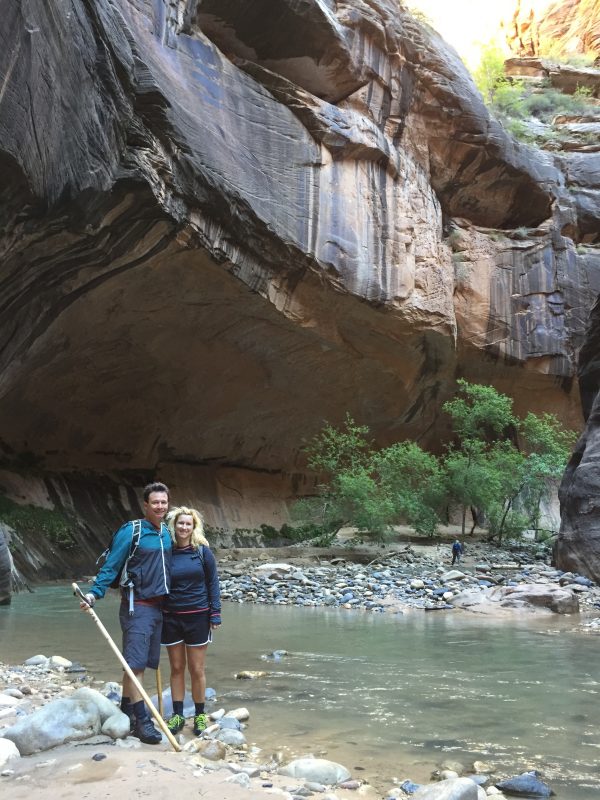 While the owner checked us in, he asked what hike we had done that day and recommended hiking “The Narrows” for our next hike. He patiently explained that it would be a water hike going up the Virgin River with walls about 1,000 feet tall on both sides, while only being roughly 20-30 feet wide. We were instructed to visit a nearby outfitter up the street that would rent us neoprene booties, hiking boots, and walking sticks. This would make our hike more enjoyable in the cold water 😝.

The next morning we were entering the park as the sun came up. No sleeping in on this vacation! We knew we had to beat the heat as well as the crowds. We had all of our gear, plus water and snacks. There was an option to take a special shuttle to the start of The Narrows, and then walk down river 16 miles. We weren’t prepared for that kind of hike and opted for the shuttle that would drop us off at the River Side Walk. This paved trail would take us upriver one mile where we would then begin to start walking up the river, making our way through any shallow areas we could.

We had exited the bus with several other people that would be doing the same hike. As we all made our way up the river we quickly separated and we were on our own. We were dressed in shorts and layers of long sleeves. It was absolutely freezing! We were having second thoughts because it was so cold and we had just began our hike.

We discussed leaving and returning in a few hours when the sun had come up and warmed the valley. Eventually, we decided to just keep moving and hoped we would warm up soon from the physical activity. We sure could have used a hat and gloves.

As we slowly made our way up the river, our legs became numb from the cold. The water was usually just above our knees. Some areas we were able to walk on the bank and over rocks without getting wet. We made better time that way. Every once in a while we would see another person. We usually had them take our picture! We learned our lesson the day before when we only had one picture of us together for the entire day. 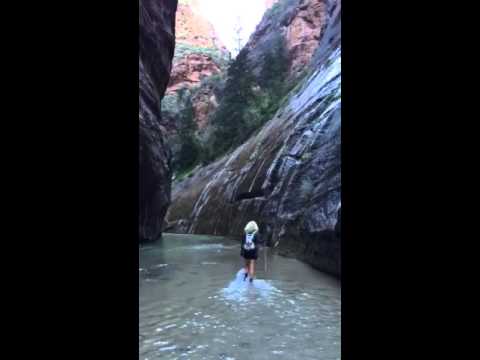 It was so peaceful walking through the narrow canyon. We really enjoyed it. The water was clear and we were able to see the shallow areas and it allowed us to avoid the deeper sections. We walked through one area that had such a strange feeling to it. The energy felt different and I was happy to keep on going. It made us think about a man who had died in The Narrows a month before our visit. A flash flood had come through while he was hiking with his friend. They both managed to get up to a safe place high up on the walls, but on opposite sides of the river. They were stranded for six hours and unable to hear each other across the raging river. The man’s friend ended up letting go and floating down the river to safety. He tried to get help to rescue his buddy but the authorities determined that it was too risky and that his friend was at a safe enough location. The next morning, they found the stranded man’s body after it had floated down the river.

It’s such a sad story and we did think of him as we hiked. It definitely reminded us to be aware of our surroundings and the potential for flash floods.

After hiking a couple hours we had gone 4.25 miles. It was slow going, hiking through water. We noticed the water was getting deeper and we were still freezing.  We had yet to see the sun. We could have gone further, but decided it was a good time to turn around, still ending up with over eight miles by the end of the hike!

We kept watching the sun on the side of the cliffs, it still hadn’t made its way to us at the river.

About two miles later we turned a corner and were shocked to see about 20 people walking up the river toward us! It had been so quiet with only a few hikers the past couple of hours. As we walked farther and farther down the river we were surprised to see so many people.  Shuttle loads of them. They must have waited until later in the day to get started. Once we reached the last mile of the river, we came around a corner and there was sunshine all the way down to the river! There was also about 30 people soaking in the sunshine on the rocks. We stopped to warm up and have a snack. The water was no longer clear since so many hikers had passed through. We saw people from all walks of life and all ages, as some were wearing long dresses, denim jeans and even a few were bare foot.

At one point Scott had an issue with his knee and reinjured his torn ACL. He could barely put weight on that leg. That sure made for slow going, luckily we had our walking sticks and he was able to use them to relieve the pressure of stepping with that leg. For a little while and elderly man and woman stayed with us, walking behind Scott. We were walking at the same pace. They felt bad for him and were worried about him making it out of the river. It was so sweet and kind of funny.  I really wanted to take a picture of them walking right behind Scott but he was in no mood for pictures.

The last mile was on the paved trail and headed back to the shuttle. What a relief to be out of the water! We talked about what an amazing adventure that was. It was so much different than anything we had ever done. It was a completely different experience before the crowds arrived, and we were so glad we had opted for the early start so we could enjoy the peaceful solitude.

Note to self: Next time, take the shuttle and walk the entire 16 miles. Also, wear lots of layers, including a hat and gloves, and maybe even bring a thermos of hot coca. 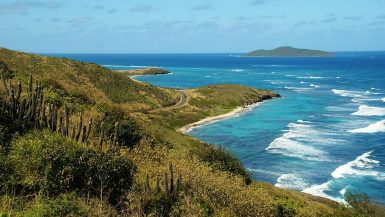 # Hiking in My Backyard